It was an announcement that caused a real stir at ‘Burn The Shard: Part One’…

Badger Kull will be performing!

But how? This is not what we were promised in Liverpool at ‘Welcome To The Dark Ages’…
‘For one night only…’
‘Performing their only song…’

BADGER KULL – For One Night Only 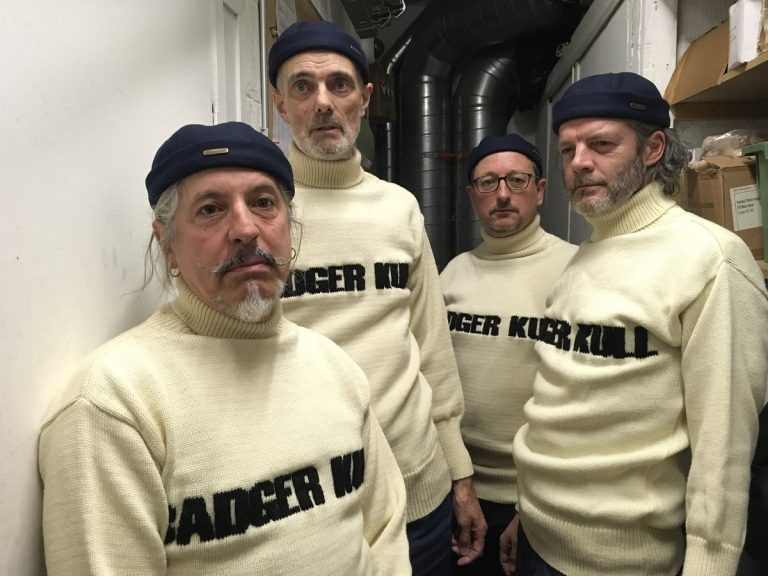 A few weeks ago I was watching a film called Detroit, about the 1967 explosion of anger which set that city alight. The film is so violent, so real, it feels like the Saving Private Ryan of civic protest. It strips riot of cool, and humour.

On the bus home I found a piece of paper in my pocket. This held the lyric for a song called Burn The Shard, which I was learning for a gig a few days later. I’d put together a scratch shanty crew to provide entertainment for an evening event I knew little about. We were to sing only one song – a version of the classic halyard shanty South Australia, but with new words. Instead of ‘We’re Bound for South Australia’, we’d sing ‘We’re bound to burn the Sha-ard down’.

Don’t get me wrong. I despise that temple of mammon as much as anyone. Looking like Barad-Dur – Sauron’s duplex – the Shard is a sort of Dubai in the Sky, and if any edifice demands contempt, it does. But having witnessed the sober reality of civic inflammation, fuelled in Detroit by righteous resistance to oppression, I now felt uneasy to be party to what whiffed somewhat of art school onan. I didn’t want to play with fire. 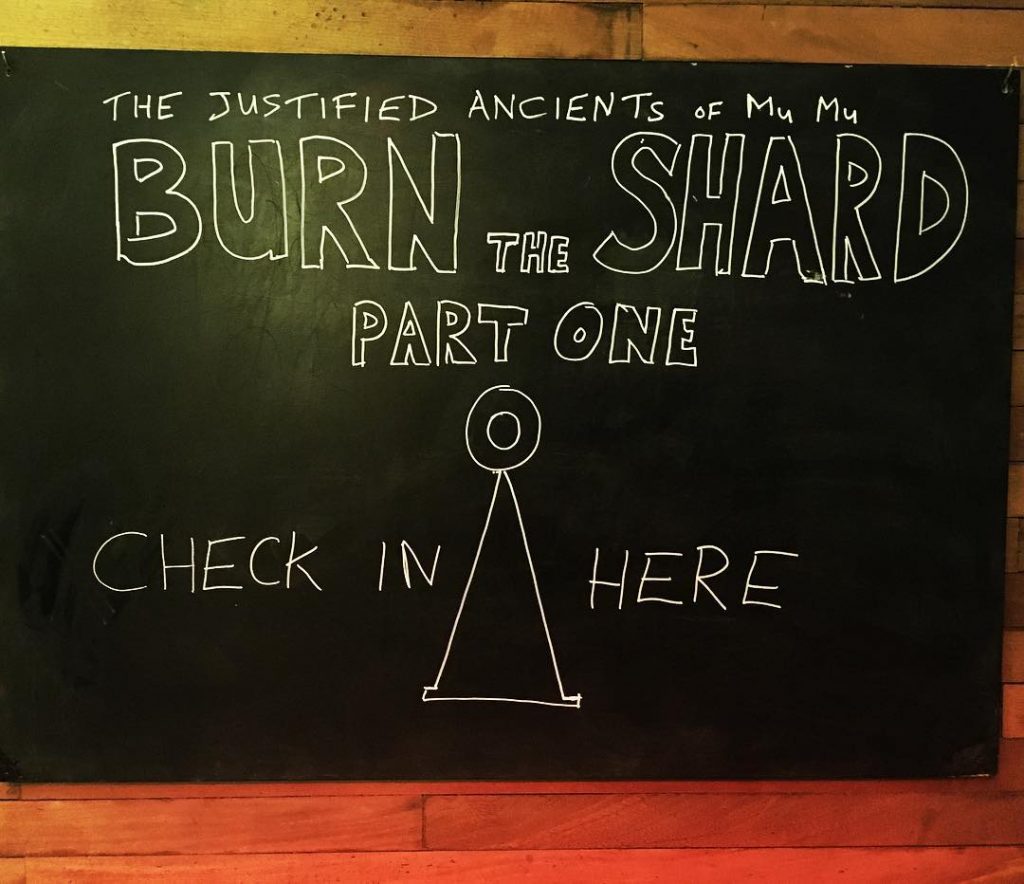 But a paying gig’s a gig, and the man who’d brought me in is a lovely, genuine fellow. I was due to get a free jumper, and cap. Plus, onan or not, it looked like fun. So on I jumped.

We crew gathered in a hipster bar by a canal in East London. This was base for the evening. 99 vetted volunteers were the night’s audience/congregation, the process of their inclusion carefully managed to maximise excitement. When we arrived, the volunteers were already out doing their stuff, leaving a couple of hours for us to rehearse. It was our first time singing together, though we knew shanties well. The only place to practise, away from music or punters, was a thin passageway leading to the bar’s store cupboards. There was just enough room to stand in a line, except when staff appeared to get stock or have a fag. Which they did every few minutes. 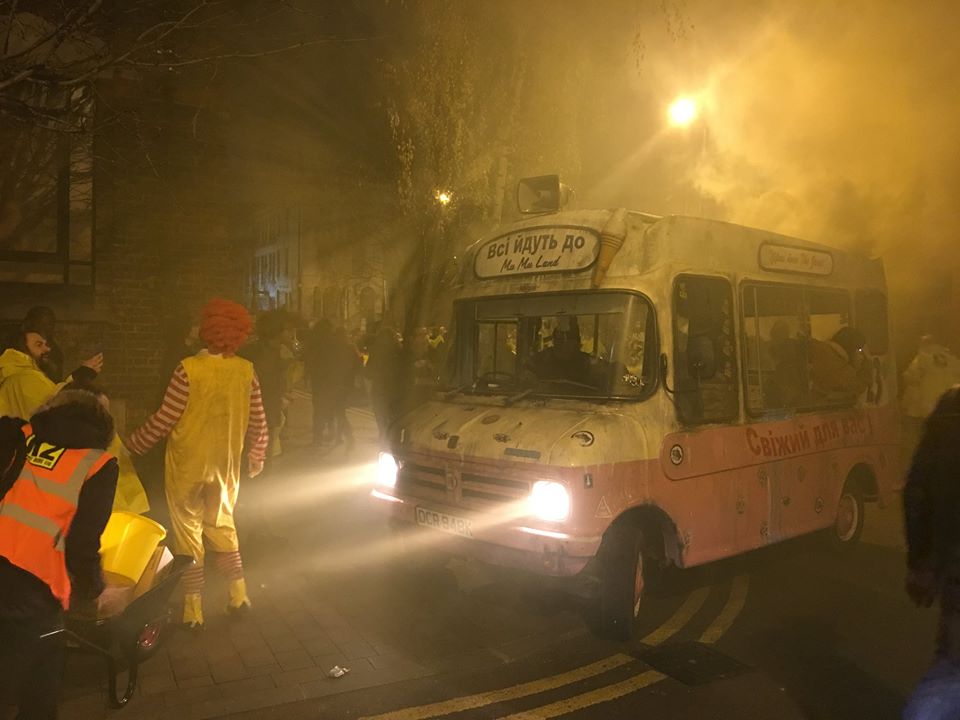 We sang through the shanty about eight times, working out a routine, settling into our parts and getting tighter. We went back down to the bar, with 90 minutes to spare before our due time of appearance. Suddenly the bar filled up, first with people, then the stench of spent smokebombs. These were the volunteers and they carried the smell in their hair and their clothes. They’d been out across local neighbourhoods all evening, flyposting, letting off smokebombs, I wasn’t sure exactly what. Ronald McDonald stood amongst them. Now back at base, they looked excited and tired. Those in charge seemed desperate to appear disinterested in what was happening. We were told we would perform earlier than planned. Apparently a poorly-briefed security guard at the Arcola Theatre had not allowed 99 strangers to waltz through the property, so the evening was taken short.

No matter. We returned to our passageway and dressed up. Once in costume, I was delighted we looked like something out of a Wes Anderson film, particularly my favourite The Life Aquatic with Steve Zissou. I proposed we maintain that classic male gaze of Pointless Grandeur. Apparently we were a band called Badger Kull – the words were woven across our white fishermen’s rollnecks – but for only one night.

The brief was to sing the shanty and get the room to join in. No problem. As folk singers, that’s what we do.

I had a panic trying to put on my wellington boots. I’d had an operation to rebuild my ankle five weeks beforehand and, while I was fine for standing and singing, I’d not realised my ankle could not bend itself into the shape required by a long boot. That hurt. 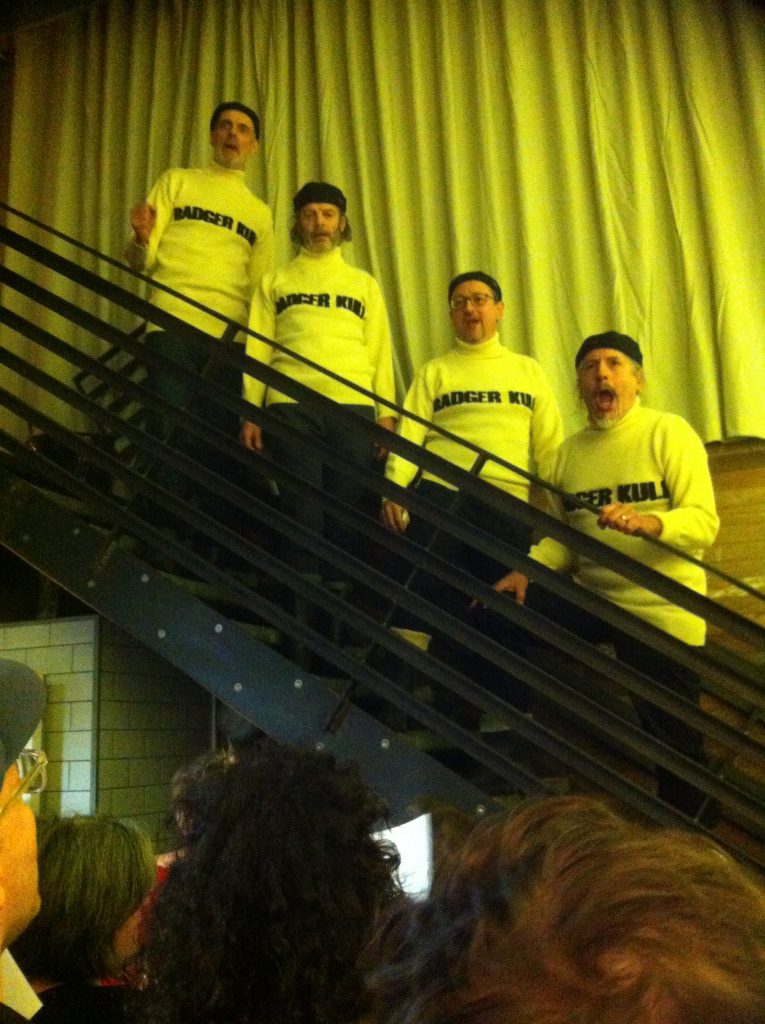 We hid out of view, upstairs. We heard ourselves announced, then a mighty cheer. We processed halfway down the stairs at the end of the room, fully visible to all – an excellent stage, it must be said – and sang our first two verses. These went down well. Then I spoke, announcing we were Badger Kull for just one night and inviting people to prepare themselves for shanty in the best way possible – to hunt the smell of the sea, and to sniff their neighbour, close, to source that stench of cod, salt and sweat. This people did. Then, after a brief guide to what they must sing, we started the shanty proper. The volunteers sang along. Cameras appeared. When we finished, there was more cheering. We departed upstairs with rehearsed sneers. Five minutes later we were back at the bar, beaming, beer in hands.

Truth be told, the volunteers’ joy for the performance seemed disproportionate to our effort. Clearly Badger Kull meant more to them than us. The mood was happy, the organisers pulling careful strings behind their studied nonchalance.

Was it all a wank? No – there was plenty of wit, effort and good humour. Did it insult real civic protest like Detroit? Not really, because it was so low-key. Was it art – I’ve no idea.

We came, put on some jumpers, sang a song, drank a beer and went home. Safely.

Matthew Crampton tells stories and sings songs. On 11 January he plays The Union Chapel, London with a show he has co-written called The Transports. The show tours Britain. More details at http://matthewcrampton.com/ 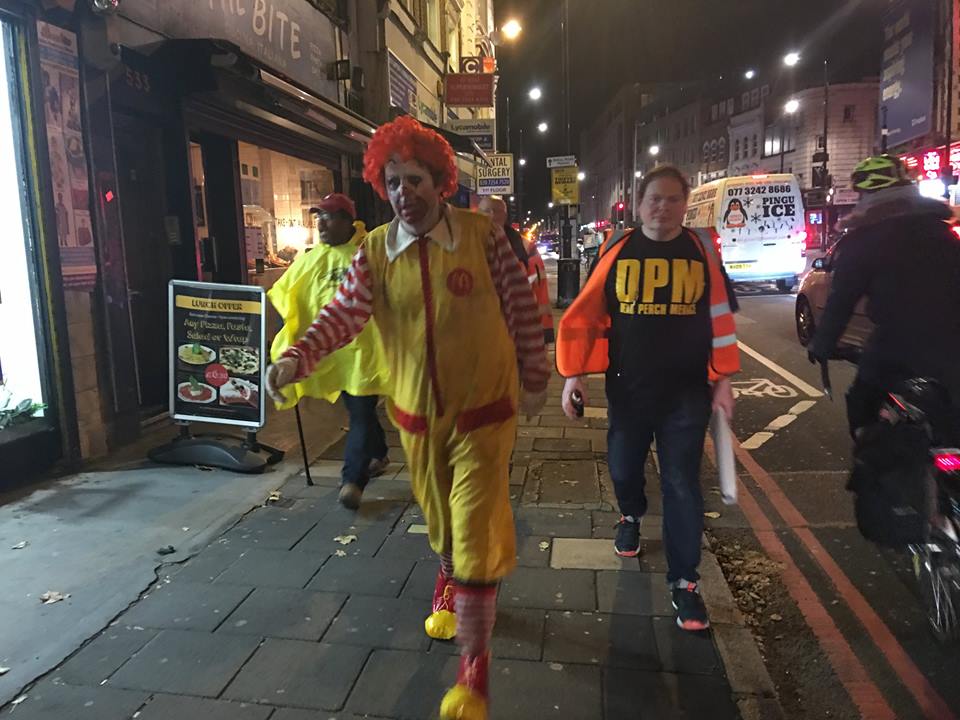 A version of this article is also available on Matthew’s website here. 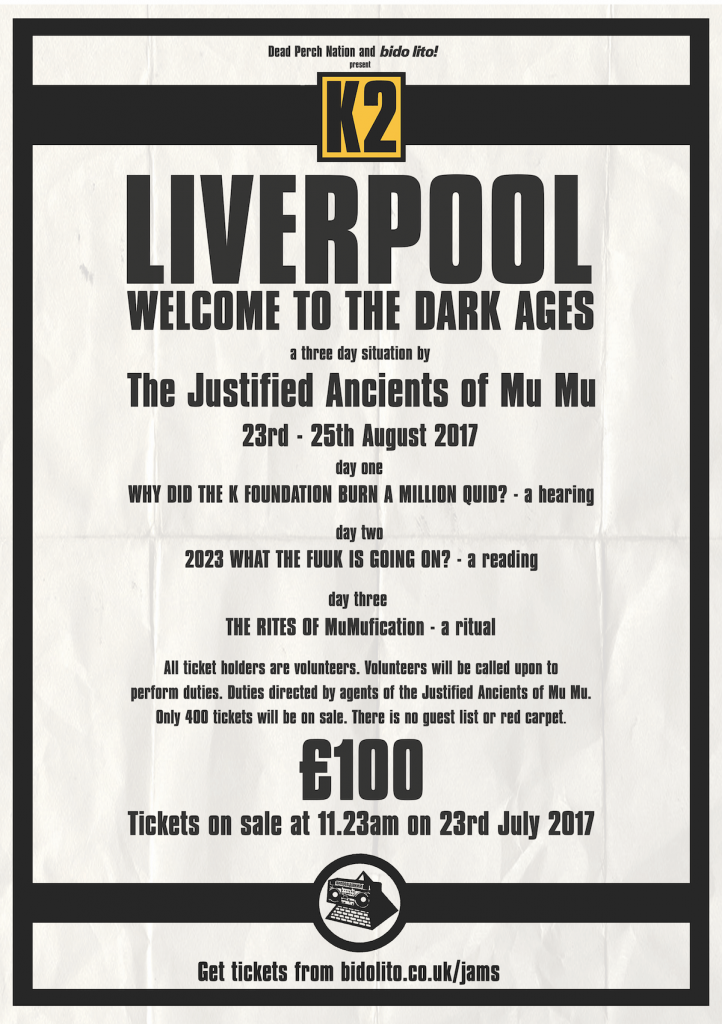